For Nuit Rose 2014 I presented my video performance - Bananagrams. By the end of the night I had many people roaming the streets with my scripted bananas.


Scotiabank Art in Transit: Confluence for Caribana where among other pieces I screened my 2 minute single channel video The Line is Drawn on pattison screens in subways and malls across Canada. Curators Pamela Edmonds, Sally Frater and artist Sandra Brewster were present at the opening. I was also interviewed on CP24 to promote the exhibit. 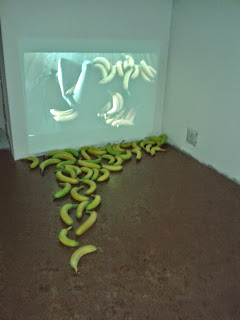 For Open House Exhibit and show, I had the Bananagram installation which worked beautifully in its location close to the ground. I had help from some of the little ones who worked with me to distribute the bananas. It was a packed house but almost everyone left or ate or had a banana.

Posted by Natalie Wood at 9:51 PM No comments: